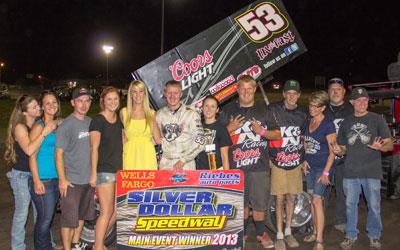 The number seven doesn’t always have to be about luck, for Andy Gregg it just means plain talent! The Guts Racing Team clicked off their seventh win of the season on Friday at the Silver Dollar Speedway. Gregg wasn’t the only team to share in the winnings this week. Eagle’s own Jason Martin proved the performance of his suspension service by conquering a talented field of RaceSaver 305 entrants at Eagle Raceway from the twelfth starting position. Jack Dover traveled North to Huset’s and planted his seat in the Denny Wasmund owned Eagle. The win was Dover’s first ever at the track. Lorne Wofford continues to set the pace at El Paso Speedway. Brooke Tatnell won at St. Croix Valley Raceway with the UMSS, raving about his new Eagle car. Schnee drivers also impressed--two of them in new stack tube cars. Russ Hall scored a win at Burlington’s 34 Raceway, and Don Droud Jr. paced the field in the Ochs 1x at Doniphan with the Nebraska 360 Sprint Series at Mid-Nebraska Speedway. Aaron Wisch wheeled a Flex-Rite car at Arlington Raceway and grabbed his eighth win after opening the season with six wins in a row. A big congratulations and thank you to all of the teams who continue to prove the performance of both premier brands. Next up for Eagle Motorsports is the IMCA Sprint National Championship weekend at Eagle Raceway. Join us on Facebook.com/EagleMotorsportsinc